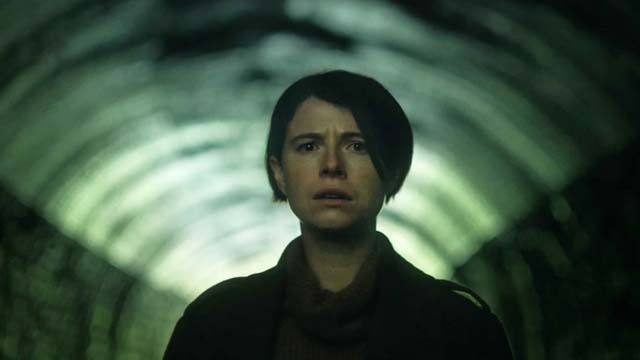 Alex Garland’s (Ex Machina, 28 Days Later) film, Men, may leave the viewer with more questions than answers, which isn’t necessarily bad. It is a horror movie brave enough to take an audience on a twisted journey and send it out of the theater with an eerie “what now” feeling. As a result, moviegoers may not be satisfied but may leave intrigued enough to watch his previous films.

In the film’s opening moments, Harper, played by Jessie Buckley, watches her husband falling out of a window. His death propels her to escape to the quaint English countryside. When actor Rory Kinnear shows up in his first character as Geoffrey, the weird caretaker, the action begins. While Harper’s husband’s death haunts her, Rory Kinnear embodies every aspect of his personality as he plays eight distinct characters set to taunt or torment her. Harper has one supporter, her sister, to whom she keeps trying to talk via glitchy horror room video chat. Unfortunately, as in almost all horror movies, their connection is predictably bad. As a result, she is left to suffer alone with all the men who terrorize her.

Jessie Buckley stars as the woman in Men. Just like her performances in The Lost Daughter and I’m Thinking of Ending Things, her acting makes sense of confusing films. She is so good that she steals a movie that should belong to at least one of eight characters played by the fantastic actor Rory Kinnear. Kinnear (Penny Dreadful), who is the son of actor Roy Kinnear of Willy Wonka fame, runs the gamut of silly to truly terrifying as almost all of the men in “Men.” An audience could wonder why the director didn’t take the movie a step farther and have him also play Harper's husband at the beginning of the film. Kinnear slinks through the movie and is believable and sometimes grotesque as any leading man in a horror film.

One must give credit for much of the film’s success to cinematographer Rob Hardy, reteaming with Garland after Ex-Machina. The dankness of the countryside juxtaposes glorious wide shots that lets Buckley’s acting breathe. One moment she stands before a tunnel that is so beautiful viewers may forget they’re watching a horror movie. The trick to great cinematography in horror is to make the audience relax and then smack them right in the face with an entirely different color pallet. Hardy does precisely that, enacting emotion with each frame.

As good as the acting and the look of the film are, it will be unsatisfying for some. The ending, reminiscent of the tone of Darren Aronofsky’s Mother, is strange and relies heavily on metaphor. It is not for an audience who likes everything wrapped up tidy. There is nothing tidy about Men. However, viewing the film the night before the official opening, the theater was almost entirely full. Whether it was based on the love of Garland’s work or simply what has become a controversial title, the marketing team from A24 might be the most significant success of the night.