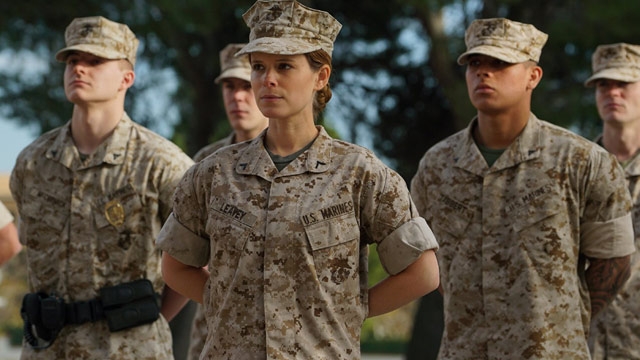 Megan Leavey belongs to the subgenre of war films that focus on the people who fight in wars rather than on war itself. It also serves as an important recognition of female soldiers and their contributions to the U.S. military. The movie’s narrative is fairly standard, following its main character as she is initially drawn to the armed forces, goes through her Marine training and active service in Iraq, and then has difficulty adjusting to civilian life upon returning home. But in addition to its portrayal of a soldier’s experiences, which are based on a true story, Megan Leavey explores the love between an animal and a human—its deepest joys and sorrows, as well as its possibilities for redemption.

While the first half of the film immediately earns the viewer’s sympathy for protagonist Megan Leavey (Kate Mara), it’s otherwise poorly paced and unclear about the details of her unhappy home life and reasons for joining the military. It also fails to convey the enormous effort involved in her transition from directionless young adult to shiftless boot-camp graduate to expert combat-dog handler. The action in this part of the movie often feels like a commercial for the Marine Corps rather than a thorough account of a real marine’s growth and development, with the achievement of each milestone in Leavey’s military training summed up by a brief montage that seems to compress efforts that would take months or years into just weeks or days. And while her stature as a determined and relatable female soldier is important in and of itself, the treatment of her achievements as a foregone conclusion underrates them and makes them seem less impressive than they actually are.

However, the brisk coverage of Leavey’s training allows the film to move on to its true focus: her relationship with her combat dog Rex, who is trained to be sent ahead of troops on the front lines to detect explosives. Leavey is initially terrified of Rex when she’s assigned to the cleaning detail at the canine center where he and the other combat dogs are held, but after taming him—the most aggressive dog at the base—she finds both a best friend and a vocation. Her connection with Rex leads her to become the most sought-after dog handler on her male-dominated base in Iraq, and her determination in this role leads her to risk her life in a treacherous situation even after she and Rex are injured in an IED blast during a mission. While this display of bravery earns her a Purple Heart, it marks the end of her active service and causes her to be separated from Rex when she’s shipped back home.

After this combat scene, which is suitably chaotic and intense, the film becomes more evenly paced, finally giving the viewer time to understand Leavey’s troubled relationship with her parents (Edie Falco and Bradley Whitford) and her struggle to connect with other people; meanwhile, the story acknowledges the void caused by the death of a close friend, which her connection with Rex had helped to fill. Leavey’s failed romance with fellow soldier Matt Morales (Ramon Rodriguez) underscores the gravity of her relationship with Rex, and makes her separation from him seem all the more painful.

This later section of the film provides some much needed depth, allowing the viewer to comprehend the complex emotional experiences that a soldier might have before, during, and after his or her experiences in active service. In so doing, director Gabriela Cowperthwaite creates an effective character portrait that does justice to the experiences of American military personnel. Megan Leavey is also an admirable tribute to the connections made between animals and humans, which are rarely treated as seriously or as credibly as they are here. Although the pacing is often uneven, the movie’s portrayal of this subject is emotionally effective without ever feeling overwrought, proving that films about animals do not necessarily have to be just for animal lovers.