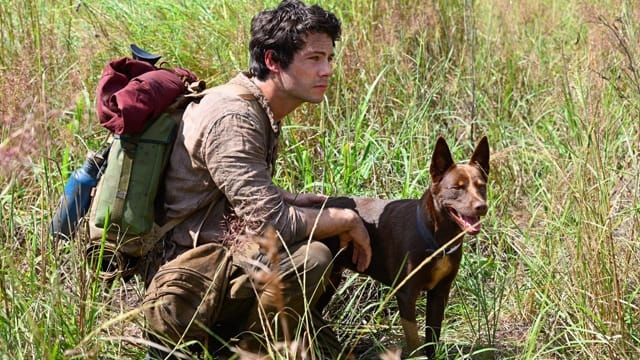 For Love and Monsters, director Michael Matthews takes a capable script by Brien Duffield and Matthew Robinson (Dora and the Lost City of Gold) and turns it into a hidden gem of a film. It isn’t a masterpiece, but is more memorable than most post-apocalyptic dramedies.

Joel Dawson (Dylan O’Brien) and his love Aimee (Jessica Henwick) get separated because of monstrosities that have taken over the world due to radioactive fallout. For seven years, he has lived fearfully in an underground colony, using ham radio to try and find her. When he does, Joel decides to undertake the 85-mile journey to the colony she runs, even though he hasn’t been above ground since the catastrophe. Joel’s travels take him across all manner of terrain, face-to-face with numerous monsters, joining him with several unlikely allies. But even if he makes it to Aimee, will his journey truly be finished?

The script is solid. Instead of checking off every possible trope, it works hard to avoid many of them without trying excessively hard to be different. Outside of the journey itself, there are several surprises along the way, and little things mean a lot later on. The progression is good, letting Joel develop from a scared post-teen to something of an icon. The story gives the viewer enough background to know why Joel is the way he is but primarily concentrates on Joel’s development in the present.

In addition to a solid script, Matthews’ direction makes every character, from Joel down to featured colonists, come to life rather than just being flat on the screen. The characters’ interactions are more realistic to the situation than most post-apocalypse films tend to show, and this is a credit to both direction and acting. O’Brien realizes that his character is the only one the film focuses on from beginning to end and goes to town on the role. The subtlety of his performance, whether the scene is serious, humorous, or harrowing, is refreshing from the always-scared characters similar to Joel.

The final piece that propels this film to success is the special effects, starting with creatures that are more realistic than those imagined with no rhyme or reason. The art director took pains to think about the monsters’ sources – what they would have evolved from and potentially how – and work from a basis of science rather than fantasy. This gives them extra life above the typical scary beast.

Love and Monsters is not going to fit the mold for anyone with specific expectations going in. Instead, it is something new and better. Best of all, it allows the genre to evolve into something bigger than its original source.