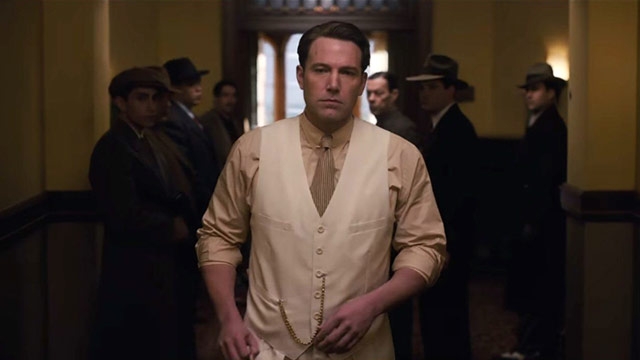 Taking a respite from his Caped Crusader compulsions, Ben Affleck wrote, directed, and stars in the underwhelming Prohibition-era gangster drama Live by Night. The tale follows Joe Coughlin (Affleck), the son of a Boston cop (Brendan Gleeson), who ends up on the wrong side of the law after serving in World War I. Coughlin is a bank robber who runs afoul of two warring crime families in Boston -- the Irish mob led by Albert White (Robert Glenister), and the Italian clan of Maso Pescatore (Remo Girone). To make matters worse, Coughlin falls in love with White’s mistress Emma Gould (Sienna Miller) behind the crime lord’s back. After a series of events results in a three-year stint in prison, he emerges from the joint and agrees to take over Pescatore’s bootlegging operation in Ybor City, FL, which is being threatened by White. Though he dislikes the gangster lifestyle, the defiant Coughlin sees little choice but to up-anchor.

Setting up in Ybor with his old partner Dion (Chris Messina), he begins to muscle out his competitors and strike agreements (notably with a sheriff played by Chris Cooper). He falls in love again (this time with Zoe Saldana -- real tough life, Ben), but finds trouble with his competitors, religious fanatics (the most notable played by Elle Fanning), and the KKK. As Prohibition comes to an end, Coughlin is forced to adapt to the changing criminal underworld or face the consequences from his bosses up North.

Affleck is constantly reassuring viewers that Coughlin hates acting like a gangster, even while he grows increasingly vicious and spirals deeper into a life of crime. His character demands the audience’s empathy, or just their pity, but his convoluted moral compass does nothing to prompt those emotions. Instead, his organization lumbers on as he seizes control of the rum market and eyes the casino business. Regardless of how gratifying it is to see KKK members take bullets between the eyes, everything this disingenuous rebel does feels either at odds with his stoic guilt or seems to exist in a vacuum of motivation. Coughlin’s revenge plot against Albert White, ostensibly the driving force behind his move to Florida, fades into the background for long stretches before it reaches an unsatisfying conclusion. A hackneyed ending in which his lifestyle catches up to him offers no consummation or justification for the previous two-plus hours -- most viewers will just be anticipating the fade to black in order to get on with their lives. Live by Night is an overstuffed, paint-by-numbers gangster drama without an imposing central figure or any fresh ideas, and it does little to distinguish itself from the crowded mediocrity of its contemporaries.

This endlessly talky drama was lensed capably by cinematographer Robert Richardson (Kill Bill, Inglourious Basterds), who photographs the undeveloped Florida swampland to pleasing effect. He’s able to get the most out of the movie’s greatest asset: the period accoutrements and set design in both Boston and Ybor. But despite a brief, yet exciting car chase in the film’s first third and the requisite scenes of gunplay that come later, Richardson has little to do but point his camera at his star’s posturing. Live by Night ultimately buckles under the bulky script that Affleck adapted from Dennis Lehane’s 2012 best-seller; there’s a lean, captivating tale about the lawless days of Prohibition in Florida, but Affleck lacks the precision to pull it off here.

A Most Wanted Man—The AllMovie Review

A Most Wanted Man—The AllMovie Review