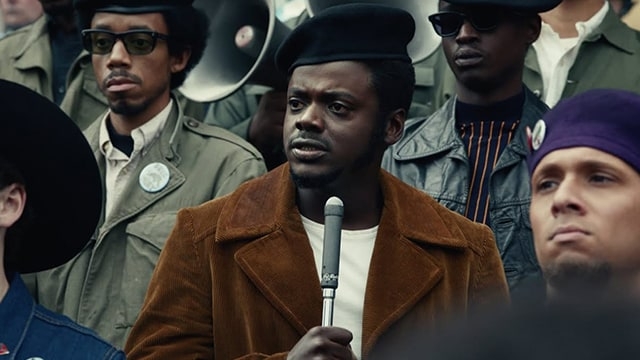 Judas and the Black Messiah is a mesmerizing film and an incredible story. Director and writer Shaka King, along with the rest of his writing crew, unpack each layer very carefully, developing intrigue at every step. The plot doesn’t necessarily need much help, but it is enhanced by two incredible performances from Daniel Kaluuya and LaKeith Stanfield. “Judas” is what you get when the government paints someone as a terrorist, the people paint the same person as a revolutionary, and an FBI informant is caught in the middle of it. This is natural drama at its finest, with an underlying message of hope and equality.

Fred Hampton (Daniel Kaluuya) is the chairman of the Black Panther Illinois chapter. His life is quite literally dedicated to the people, the ones who are treated unfairly every single day. When Bill O’Neal (LaKeith Stanfield), a small-time car thief, is caught, he eventually takes a deal to be an FBI informant. His job: infiltrate the Blank Panthers and gain Hampton’s trust. The United States government was afraid of Hampton, and they would stop at nothing to bring him down.

As a film, Judas and the Black Messiah, flies by in an instant. Taking place during a turbulent time in Chicago history, every scene is filled with some sort of tension, hope, or both. Much of this is brought on by the two leading actors, Kaluuya and Stanfield, who play their respective characters convincingly. Stanfield, in particular, continues to cement his stake as one of the best young actors around. He commands every scene, and the audience can get a sense of what he is going through. The only downside to this duo’s collective performance is that there wasn’t more of it. The audience watches O’Neal rise the ranks in Hampton’s chapter, but there is very little emotional connection shown between the two. Real-life circumstances may have dictated the relationship, but it would have been interesting to see Hampton and O’Neal’s true feelings toward each other.

Judas and the Black Messiah is also shot exceptionally well. The dark, brooding backgrounds and lighting really set the tone, and is consistent throughout. It conjures feelings of despair and allows the audience to get a microscopic view into what these activists went through. King is not subtle in his approach; his message comes across loud and clear.

This is a biopic about two soldiers in the middle of a race war; one is standing up for what he believes in, the other is a double agent. This is a fascinating story of activism, friendship, and betrayal. Great filmmaking and near-perfect acting combine to make Judas and the Black Messiah a must-see movie.