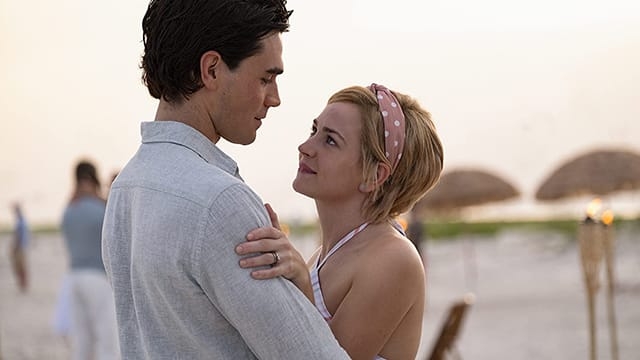 Unsurprising and emotional, I Still Believe is a weepie film at its core. The overdramatic camera movements, overexaggerated plot and oversentimental music reveal a true story trying too hard. Solid lead performances soften those mechanisms but not by much.

The film, directed by the Erwin Brothers (Andrew and Jon) and written by Jon Erwin and Jon Gunn, is based on the real-life experiences of Christian rock singer Jeremy Camp as detailed in his book of the same name. Broadly, it’s a story about love and faith. Jeremy (K.J. Apa) meets Melissa (Britt Robertson) in their early college days, but both are tested spiritually and emotionally when she is diagnosed with cancer.

I Still Believe prefers a general emotional sweep over a deep dive. It spends a reckless amount of time within the first two acts on fluff scenes. We witness their meet-cute, their montage of holding hands, and the subplot of a nemesis that’s an all-around swell guy.

The plot holes and lack of straightforward timeline are even more so glaring. How does Jeremy make the leap from an essential unknown to a performer in sold-out shows? There’s no exact moment to point to; it just happens. This is also the case at the start of the film, with Jeremy as a freshman in college, and then somehow, he’s in his 20s in the blink of an eye.

Moreover, the story determines to only engage their romance in a general faith-based understanding. As a result, it collapses into melodramatic declarations as opposed to real-life moments. Their first date conversation is one example. Melissa says, “The God of a trillion stars knows my name,” and Jeremy is entranced. This histrionic corniness frequently becomes laughable.

The film edifies the dramatic tone in all other aspects as well. There is an over-the-top, slow-motion eye contact when Jeremy and Melissa first meet. The continuous tracking and crane shots in almost every scene becomes a means to sweep the audience through a whirlwind romance. Even performances of Jeremy’s original songs such as “I Still Believe” and “Walk by Faith” are utilized as soaring emotional placeholders as opposed to real conversations.

However, it’s applaudable how I Still Believe still manages to convey the full emotional turmoil of cancer, and how faith in God can play a role. Robertson’s unshakable performance is as raw as it can get in a weepie film. Prior to this role, she’s primarily been typecast in the teen arena but her turn as Melissa is proof-positive that she has acting chops beyond her resumé.

Star of the CW teen melodrama Riverdale, Apa is also from a similar background. And though he doesn’t convey “the look” as a romantic lead as well as he does in the television drama (probably due to broad writing), he plays a flawless heartbroken wretch that finds grace.

When you aim high, some apples are bound to shake loose. I Still Believe shakes loose some great performances and a general appreciation for the vast craziness of life. But the stakes of this real-life story are, regrettably, pushed over the edge.