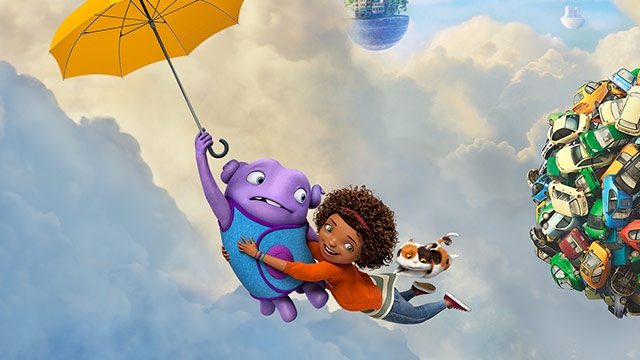 After yawning through parts of Home, Dreamworks’ latest animated feature meant to topple the Pixar empire, you might be tempted to pick up the phone and call the company’s creative department to whisper, "It's the story, stupid," à la James Carville (and then slam the phone down and yawn some more). The movie suffers from an inferiority complex as it tries, but ultimately fails, to emulate its formidable storytelling rival.

Home is a nebulous concept for the Boov, a nomadic alien race who must relocate every time their enemy, the Gorg, catch up to them. Led by the vain and cowardly Captain Smek (voice of Steve Martin), the Boov decide that Earth would be a perfect place to hide in plain sight, save for those pesky humans milling about. But that’s no problem, as they decide to suck up all of mankind like they’re hoovering dirt, and transplant everyone to the Australian Outback. Safely ensconced in their new world, the Boov happily go about their daily life, with the exception of one misfit called Oh (Jim Parsons) who can’t seem to get anyone to show up to his housewarming party. After inadvertently inviting the entire galaxy (including the Gorg) to his party via e-mail, Oh finds himself a fugitive on the run when he’s branded a danger to society by Smek. He soon meets a human girl named Gratuity Tip (Rihanna), and promises to help her search for her hoovered mother (Jennifer Lopez) if he can escape in her car. Along the way, Oh must make a decision about whether to keep hiding or face his fears and save the Boov. Unfortunately, the rest of the film feels like an extended slow-motion chase scene.

Directed by Tim Johnson and adapted from the book The True Meaning of Smekday by Adam Rex, Home isn’t a bad movie at all; it just lacks that intangible “it” factor found in the most successful animated films. Oh isn’t a particularly memorable character: He looks somewhat like an oversize Despicable Me minion (if they really let themselves go), and his jumbled manner of speaking English will have grammar sticklers plugging their ears in horror. The story isn’t layered enough to hold the attention of adults, and there are several slow parts during Tip and Oh’s trek to Australia when parents will probably take potty breaks with the kids. As a result, adults won’t want to see it more than once in the theater, and it doesn’t feel like the type of film that anyone will linger on while channel surfing. That being said, the little ones will be dazzled by the sherbet-colored Boov creatures and their slapstick pratfalls and fainting spells. The 3D version has plenty of jump-out-at-you moments, as well as thousands of bubbles flying close enough to your face to see them pop. One of the most impressive feats of animation is the gorgeous head of springy curls cascading around Tip’s pretty, wide-eyed face. No amount of conditioner could recreate those mesmerizingly bouncy tendrils in real life.

The biggest drawback of having recognizable stars voice characters in animated films is the difficulty of separating the actor from his or her breakthrough role. Jim Parsons has such an iconic voice as Sheldon on The Big Bang Theory that one could imagine him recording his lines as Oh while lounging on Sheldon’s beloved couch in the sitcom’s walk-up. In addition, they play so many Rihanna songs during the movie that it starts to feel a tad opportunistic, as if perhaps she accepted the part simply to promote her albums.

Someday, hopefully soon, Dreamworks will stop thinking of themselves as the proverbial Jan to Pixar’s Marcia and come up with some original and memorable story lines; let’s hope that Home is the last of the pretty but uninspired films to come out of the studio.