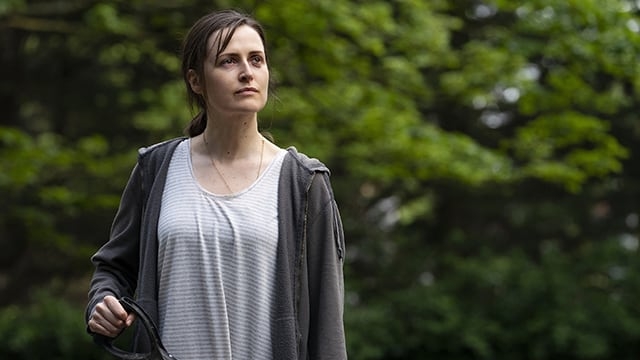 During the course of Herself, one might feel angry, motivated, charitable, and even a little bit bored. Phyllida Lloyd’s latest is deeply thought-provoking, as she explores the horrors and hardships associated with domestic violence and gives real-life victims a blank canvas to visualize their own hopes and dreams. Lloyd and her writers, Clare Dunne and Malcolm Campbell, relay a positive, if not grueling message to abuse victims: you must get back up and build a life for yourself. The end product results in an inspiring tale of perseverance and independence. The film is not perfect, featuring a few unnecessary story beats that do nothing more than act as filler, but there should be an appreciation for the type of film Herself is, one that focuses on the positive climb back to the top, even when the deck is clearly stacked against you.

Sandra (Dunne) is a loving mother of two children, who was stuck in an abusive relationship with her husband, Gary (Ian Lloyd Anderson). After years of physical and emotional abuse, Sandra knew she had to get out, and it takes a miraculous act from her daughter to essentially save her life. Now, on her own, Sandra must live in government housing (more specifically, the airport hotel), and work as many jobs as she can just to provide for her little girls. When her employer, Peggy (Harriet Walter), gives her a plot of land, Sandra becomes determined to build a house with her own two hands. Enlisting a bit of help from a local tradesman, Aido (Conleth Hill), and some friendly volunteers, she sets her plan into motion.

Herself showcases acts of ingenuity and comradery so well, that the feeling is almost tangible. Watching these people, from all walks of life, band together and help this woman accomplish her goal is really inspiring. Lloyd does a great job making sure Sandra’s struggles are well documented, and it is an undisputable fact that her life would not have moved forward if it were not for loads of grit, determination, and vision. Sandra is almost portrayed as a silent protagonist; her character isn’t fully developed and has no real backstory, except the fact that she is an abuse survivor. This was an initial turn off, as the character felt a bit flat, but after some thought, the role of Sandra was perfectly written and cast. Sandra seemingly plays as a conduit to those who have gone through an abusive relationship, and she gives each and every one of those victims hope. This brilliant character choice is subtle but appreciated.

The film falters when it explores anything beyond Sandra’s journey. Everything surrounding the main character feels bland and unimportant. The auxiliary characters are well acted and pleasant enough, but much of their time spent in the film can be written off as filler. Even Peggy, who plays an integral role in Sandra’s arc, is given confusing scenes that don’t necessarily fit into the grand scheme of Herself.

There is one scene in the movie, an extended still shot of the rag-tag construction crew eating dinner together, that should be an example of near-perfect filmmaking. This scene, which is no more than two minutes long, is mesmerizing due to its authenticity. Watching all of these people interact with each other after a long day of work truly gives the viewer a feeling of friendship and family. It is fun, real, and a tangible step forward for the emotional state of Sandra. That is what Herself is really about: the long climb for its protagonist, who at one point was on the verge of death. The film is worth seeing just for its main character’s journey, even if the rest of it seems a bit rough around the edges.