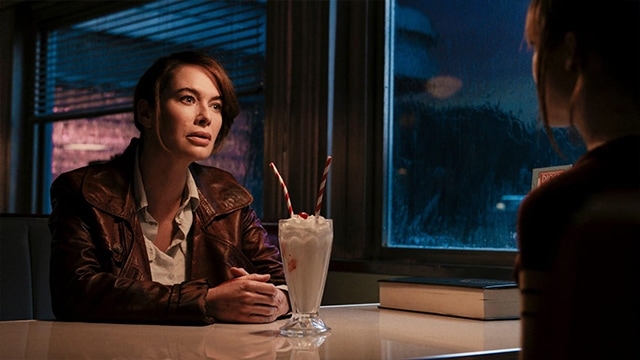 Director Navot Papushado (Rabies) takes the script he co-wrote with newcomer Ehud Lavski, mixes it with an excellent cast, and slides it down to audiences. The result is Gunpowder Milkshake, an action-packed and sometimes over-the-top film that has more enjoyable girl power than a Spice Girls concert.

Scarlet (Lena Headey) is an assassin for The Firm, but she must go into hiding when she kills the wrong person, leaving her daughter Sam behind. Now, Sam (Karen Gillan) subsequently finds herself in the same situation after unknowingly killing the son of Jim McAlester (Ralph Ineson), the head of a rival consortium to The Firm. But Sam has the added responsibility of rescuing and defending Emily (Chloe Coleman), the daughter of her final target, before losing The Firm’s protection. Instead of hiding as her mother has done, Sam chooses to fight with a bit of help from her fixer Nathan (Paul Giamatti), her three "aunts," and the mother she hasn't seen in fifteen years. Together they must stand their ground to protect themselves from the wrath of both organizations.

As straightforward as the concept is, Lavski and Papushado's script has some complexities and couches an underlying theme of the power in a man's world without making it preachy. Various settings – a diner, a hospital, and a library are plucked from the 50s, and this is no accident. It sets a tone of the backward view of women in general. It doesn't make the film about this, though, instead choosing to show the disposable nature of women by setting them in a profession rife with disposable people. The casting of these characters is brilliant, as is Papushado's direction of them. He clearly knew what he wanted out of his script. And he got it with Gillan, Headley, Angela Bassett, Carla Gugino, and Michelle Yeoh – all of whom have played women of strength and vigor. This foreshadows that when the chips are down, they will stand for it no longer. Coleman stands right alongside them, showing a mix of power and precociousness that make her character delightful instead of annoying.

In addition to the sets and exceptional acting, the soundtrack has songs selected to fit the scenes, particularly Janis Joplin's "Piece of My Heart." The action in the fights and gun battles is frantic but done with just enough camp (like much of the film) to keep them moving smoothly.

Gunpowder Milkshake is a fun ride, combining action, drama, comedy, and camp in a blender for just the right mix. It is then served, with two straws, to the audience in a tall chilled glass that is good to the last noisy slurp.