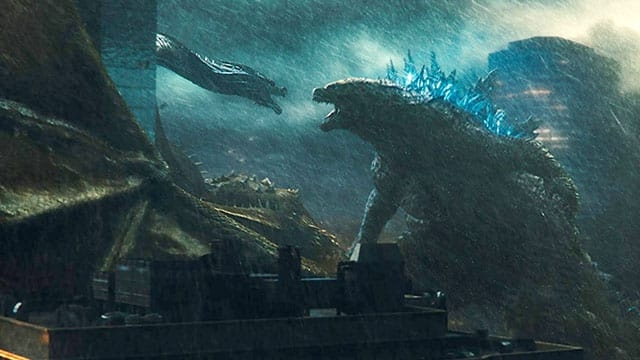 Godzilla: King of the Monsters is a big, bad basher film, with the emphasis on both big and bad. No worse than any of the other films in the franchise, there are enough buildings crushed to overlook some of the major failures that the shaky camerawork and overuse of hazy weather can’t hide. Connected to Kong: Skull Island and a sequel to 2014’s Godzilla, this installment is co-written and directed by Michael Dougherty (Trick ‘r Treat) whose horror background shows its ugly face in Godzilla: King of the Monsters. Although the fight choreography is a lot of fun, the two-dimensional characters who have little to say don’t add any value, and the required elements for a better movie are left out.

An eco-terrorist (Charles Dance) kidnaps a scientist (Vera Farmiga) and her daughter (Millie Bobby Brown), along with their mind-control device to be used on giant monsters called Titans. He’s hoping to harness his captives’ power in order to destroy humanity, which he believes will save the world. However, he doesn’t count on Godzilla to annihilate all his classic foes: Mothra, Rhodan, and King Ghidorah.

To modernize this monster movie, the filmmakers attempt to focus on the humans to scale the emotional impact. The actors chosen to embody the different characters are great, but the script is so poorly written that they can’t do much to demonstrate their presence on screen. Fans of Godzilla come to see monsters and mayhem; they don’t need scientific explanations or family drama to try to make it anything more than visceral pleasure from watching things break. In that respect, Godzilla: King of the Monsters does finally deliver a huge smash ‘em up fight scene spanning the final 30 minutes of the film. But that is confusing for viewers who witness the long, dramatic beginning which amounts to very little other than the characters just watching carnage unfold.

For a summer spectacle, it would that bigger is better, but Godzilla himself has very little screen time in his own movie. Though not boring, the film lacks the appropriate amount of destruction. It’s also hard to spot giant monsters in a film that’s basically just about giant monsters; fog, rain, nighttime darkness, and all kinds of things hide the baddies when they finally do appear, and then there are quick cutaways to horrified humans reacting to the fight that the audience can’t see properly.

Ultimately, Godzilla: King of the Monsters provides enough sizzle that the low-quality steak may be partially forgiven. Aided by the high budget, the sound and visuals are great, which is enough to pump some adrenaline through the more boring moments of the film. The feature length version doesn’t do much beyond expanding the trailer. The momentum is slowed for what everyone came to see – monsters bashing monsters.