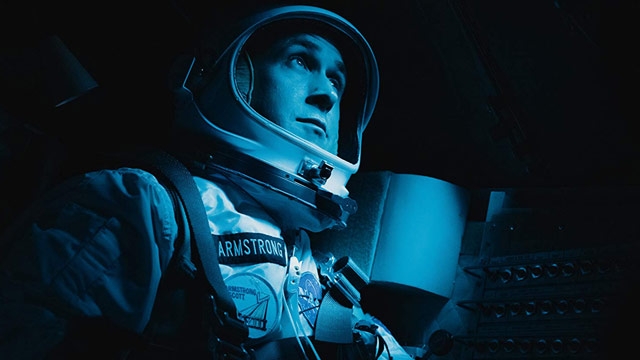 First Man is a marvelous and moving portrayal of Neil Armstrong’s trek to the moon that highlights the trials and technological challenges surrounding such a historic milestone while also examining the man behind the suit. Though director Damien Chazelle is best known for music-filled films, like Whiplash and La La Land, he succeeds in bringing one the most pivotal and emotive moments in US history to life.

The movie centers on Armstrong’s (Ryan Gosling) journey from NASA astronaut to space explorer, examining the difficulties he faces both at work and home. Early on, one of the most heartbreaking sequences is introduced: Armstrong and his wife Janet (Claire Foy) coping with the death of their young daughter, Karen. He later faces the loss of three close colleagues who perish during a preflight test. Gosling’s Armstrong is stoic, quiet, and he carries his pain with him throughout the story, which makes the moment he finally steps onto the moon that much more momentous.

One of the best parts is Claire Foy’s Janet, Armstrong’s strong-willed and outspoken wife. Her character is loving and supportive, but frequently calls both her husband and the NASA team into question for their disregard of the plights faced by families of astronauts. The intricacies in the Armstrongs’ relationship touch a nerve, bringing a sense of humanity and relatability to the film.

From a cinematography perspective, there are a few instances that can be distracting to the audience. Chazelle utilizes extreme close-ups of Gosling’s face to emphasize the claustrophobic feeling that astronauts likely felt under the circumstances, heightening the tension. However, he also constantly uses motion camera techniques to showcase the chaos and danger, almost to a fault. Anyone in the audience that suffers from motion sickness will likely find this difficult to watch. Furthermore, it is distracting enough to take viewers out of the story.

Despite these issues, the movie does bring audiences closer to the marvel that was the first walk on the moon. While other representations of this moment can focus entirely on the technical details that went into the process, First Man instead chooses to showcase that Armstrong was just an average person, bringing a truly raw and human side to the story. The only thing between him and the vast emptiness of space was a metal contraption, built by equally flawed humans.