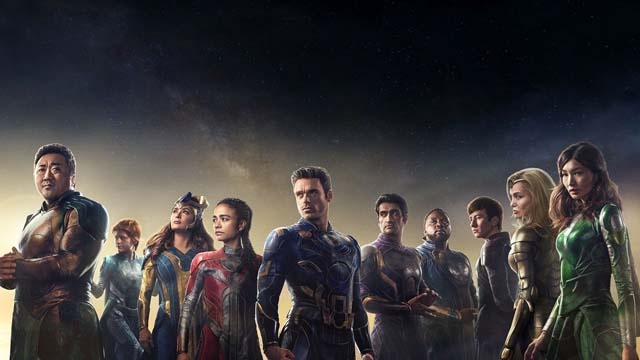 Eternals, written and directed by Chloé Zhao (Nomadland) from a story by Ryan and Kaz Firpo, is the latest film in Phase Four of the Marvel Cinematic Universe. It never loses pace, even at over 2 ½ hours long, but it falls short on development and digs some holes that never get filled.

Ajak (Salma Hayek) leads the Eternals – a group of super-powered individuals sent to Earth to destroy the Deviants, creatures bent on destroying humankind. Their secondary mission is to help cultivate humans and help them thrive and develop. But differing opinions on how to accomplish this task after the Deviants’ defeat cause a split, and the team members all go their separate ways. However, when Deviants suddenly start showing up again, they must put aside their differences and rally behind their new leader, Sersi (Gemma Chan), to prevent humanity’s demise.

The script is solid and gets the tale across, but there isn’t much development of the characters, and a couple of threads trail off into nowhere. These shortcomings are likely a result of Eternals being cousins Ryan and Kaz Firpo’s first feature-length work. Despite the 157-minute running time, the film could have easily fared better with another half hour spent on the main characters or clarifying who the main villain really is. One would think that there isn’t a standout performance from any of the actors due to this lack of development, but it instead seems intentional. Other than Gemma Chan’s Sersi, Zhao seems to want to keep the actors on the same playing field regardless of their level of fame. If this was the intent, she succeeds; none of the performances are either exceptionally good or bad.

The special effects and cinematography are spectacular, particularly the work on the various Deviants. A couple of scenes are muddied near the end, creating a bit of confusion in the way things are playing out. The costume design is also exceptional, paying tribute to the characters’ original creator, Jack “King” Kirby. Some unusual yet weirdly appropriate song choices accompany a few scenes; these are entertaining without being pretentious.

Eternals is a fun film overall but is nothing more than light fare. As long as audiences don’t delve too deeply into it or expect lush character development, they should be happy. At the end, it is clear more films featuring these characters will appear. Hopefully, this means the characters will become more three-dimensional and enduring.