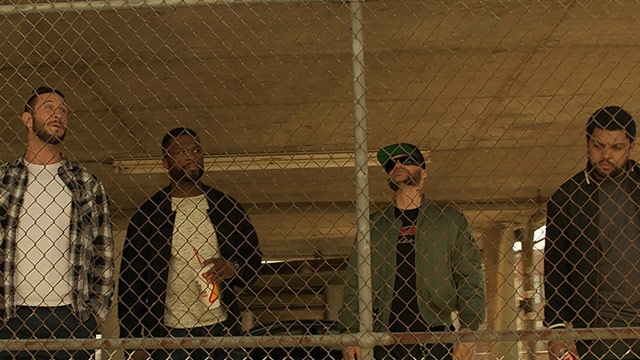 Mash up Heat with The Usual Suspects and suck out all of the character building, originality, tension, and fun, and you get Den of Thieves, an ambitious but tedious movie that manages to rob bank heists and shoot-outs of any sense of excitement.

Den of Thieves begins with the statistic that every 48 minutes a bank is targeted in Los Angeles, making it the bank-robbery capital of the world. If only the thrills in this film arrived that often. This won’t be the only time the movie relies on statistics to build drama rather than any stakes for the characters. It claims that there have been 53 attempts to rob L.A.’s Federal Reserve, and that in every case the thieves failed to make it past the lobby. Den of Thieves centers on a heist to steal 30 million dollars in out-of-circulation bills from the Reserve just before they’re shredded, which makes them untraceable currency.

The enigmatic leader of this heist is Merrimen, played by the chameleonic Pablo Schreiber. Schreiber does everything asked of him here—which isn’t much more than to recite exposition with a maniacal gleam in his eye. The Pacino to Merrimen’s De Niro is grizzled L.A. cop Nick Flanagan (Gerard Butler), who leads a special-crimes unit and has been trying to nail Merrimen for a string of intricate robberies. Much like the plot is a combination of borrowed elements, Flanagan is a hodgepodge of well-worn cop tropes. He’s constantly smoking or drinking, he’s willing to break the law to uphold it, and his behavior has driven away his wife and daughters.

Caught in the middle of these two alphas’ cat-and-mouse game is ex-con and bartender Donnie (O’Shea Jackson Jr.), who gets recruited to be the heist crew’s driver. Or so he tells Flanagan when he’s kidnapped and interrogated. Donnie divulges info to Flanagan while inexplicably maintaining his position in Merrimen’s inner circle, allowing the heist to proceed as planned. This juncture is where the movie completely loses any momentum.

The film can’t decide whether it wants to channel the Ocean’s franchise and depict how the upcoming heist is going to go down, or focus on the mental games being played between Flanagan and Merriman—so it spends too much time doing both. Flanagan loses credibility as he vacillates between being a capable detective and an impulsive idiot, depending on the needs of the plot. He is also given time to cry in his car because he misses his daughters, but then they’re never mentioned again.

The finale of the film, which involves the heist and a subsequent shoot-out, is exhausting. Much of the half-baked second and third acts are a smoke screen for the big twist, but the audience will likely be too bored with the surface-level story before it finally arrives. The “reveal” is pretty implausible and tonally at odds with the rest of the movie, as if someone tried to shoehorn the mythical, fantastical Keyser Soze into Heat.

Den of Thieves has a few clever ideas, but they are completely lost in its attempt to parrot the superior films that have come before it. No matter the reason why audiences walk in the door, they will be disappointed as the movie tries to be too many things and ends up doing a mediocre job at all of them.