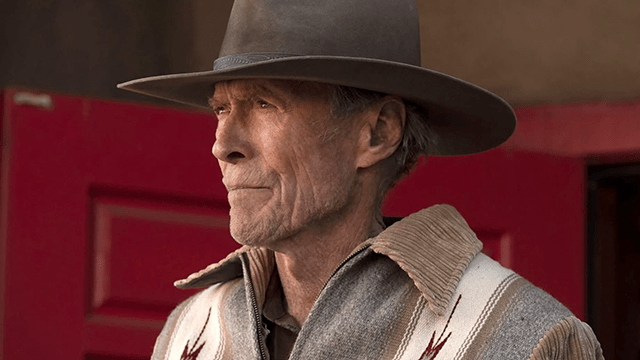 
Clint Eastwood stars and directs Cry Macho, from a script by Nick Schenk (The Mule) and the author of the novel on which it is based, N. Richard Nash (The Rainmaker). Unfortunately, while it is a good tale of redemption, it does not translate well to the screen.

Mike Milo (Clint Eastwood) is a washed-up rodeo star and horse trainer. He used to be at the top of his game, but a rodeo injury and the death of his wife and child in a car accident have left him broken and directionless. Mike reluctantly agrees when his former boss, Howard Polk (Dwight Yoakam), visits and asks him to go to Mexico to retrieve his son Rafo (Eduardo Minett). But when Mike arrives, he discovers that things may not be as they seem. Rafo decides to return and in making it back to the Texas border, Mike discovers much more about himself than he does Rafo along the way.

Cry Macho should be a touching film, but the script never seems to get its legs. Eastwood’s direction of the film and the actors is his usual high quality; there just isn’t enough to direct. The story shuffles forward in ebbs and flows until it finally reaches its anticlimactic climax. The basis, finding redemption through making ones’ own decisions, is a good one. There isn’t much else there to make the audience care about it. Many brief, underdeveloped moments make the film seem more like a collage than a linear story. Had these been addressed more carefully and thoroughly, this could have become an instant classic. As it stands, it is likely to fade; its only fame will be as perhaps Eastwood’s one near-failure. Except for Eastwood, who nails the grieving, angry, hopeless Mike well, the acting is spotty – and in Yoakam’s case, wooden.

The location managers did a fine job of making New Mexico look like Mexico itself. It was certainly no accident that the town Mike and Rafo spend most of their time in is dry, dusty, and forgotten-looking – much like Mike. The costuming is solid, too – fitting well with, at least from a gringo point-of-view, the image of an almost forgotten Mexico town.

Cry Macho is not a bad film, and that might be part of the problem. If it were terrible, audiences could forgive many of the issues with the screenplay and some of the acting. But since it does have a genuinely good story and message, the gaps in the storytelling make what could have been a touching tale more of a crying shame.