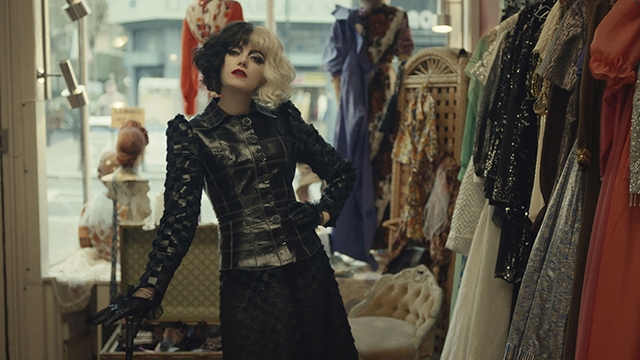 Director Craig Gillespie takes a story and screenplay by five scribes (including The Devil Wears Prada’s Aline Brosh McKenna) and brings the latest Disney villain backstory to the screen with Cruella. With great skill, he molds the tale, the actors, and the impressive sets into an exceptional entry into the Disney live-action family.

After witnessing her mother’s death and believing it to be her fault, young Estella (Emma Stone) abandons her dreams of clothing design and becomes a thief in London. But for her birthday one year, her friends Horace (Joel Fry) and Jasper (Paul Walter Hauser) give her a gift that will change her life - a position at one of London’s top fashion design agencies. This job sends her on a collision course with The Baroness (Emma Thompson), which at first seems like a dream come true. Soon enough though, the dream becomes uncomfortable, and then it turns into Estella’s worst nightmare, leading to the mysterious and thrilling birth of Cruella.

Cruella features a well-conceived script that manages to include all the essential elements of the original film while giving a plausible explanation for the way she is. Unlike Maleficent, it doesn’t excuse all her behaviors, and this is a credit to the tale. However, it does have one missing element, which is why she would decide to make Dalmatian coats when it seems she should cherish them. Unfortunately, they set this concept up and then turn it on its side by the end. Despite this, the story is well-crafted, and everything else is tied so neatly that this issue doesn’t stand out.

Gillespie does a fantastic job bringing all the pieces together. The script, costuming, spectacular settings that are equally skilled in showing poverty and excess, and exceptional performances by all the players coalesce beautifully under his skillful direction. Both Emma Stone and Emma Thompson are flawless. However, once Estella fully embraces her role as Cruella, Stone steals the limelight. Fry and Hauser aren’t quite as bumbling as the Horace and Jasper previously presented in other films, playing the roles more realistically and much to their credit. As comic relief, they’re stellar.

There are some issues with the cinematography early on, primarily in fast-moving cameras that make it hard to follow the action on a theater screen. However, this blurring smoothes out after the first 20 minutes, and everything is clean and crisp from there forward. Part of what makes the film flow so smoothly is the careful selection of songs for the soundtrack. Every piece of music is perfectly matched to what is happening on the screen.

Cruella is one of those rare films, particularly from Disney, that doesn’t have a specific target audience. As a result, it isn’t too mature for children and isn’t too childish for adults. Instead, it cleanly walks the tightrope of both, making for a devil of a good time for the entire audience.