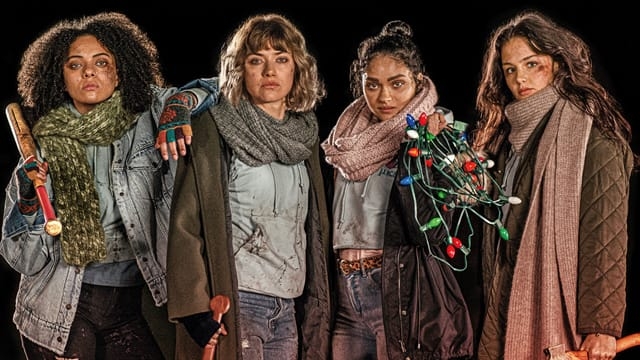 Every Christmas season brings at least one darker entry. This year it is the remake Black Christmas, written by April Wolfe and Sophia Takal (Always Shine), who also directs. Sadly, rather than being the perfect gift, this film is the ugliest of ugly sweaters.

It is Christmas break, and Riley (Imogen Poots) and her friends are preparing to travel home during the break at Hawthorne College. When their sorority sisters start disappearing and then turning up dead, they instead must try to defend themselves. Only by confronting their tormentors and their fears do any of them have hope of surviving the night.

The plot is as strained and thin as a Christmas budget soup. Instead of exploring the important subjects of consent, misogyny, and feminism in any significant manner, the writing depends on numerous tossed in one-liners. The drab remainder of the dialogue makes these quickly forgotten. The characters aren't developed enough for you to care about them, or in the case of the antagonists, root against them. Much of what happens is rushed, predictable, and rehashed, as though taken from the cutting room floors of previous, better films.

Takal has given herself so little to work with in the script that it is hard to discuss the direction. She seems to have set out to make some valid points, then built a script out from these until the points get lost in farce. Had Takal directed this into a black comedy as the title might suggest, it would have strengthened both the film and the valuable points she tries to hit.

Both the script and directing make it difficult to tell the quality of the acting, since the parts are more caricatures than characters. With so little development and so much boring cliché, the performers are just there and little else. This is true from the most novice thespian to the more seasoned Cary Elwes, although Poots and Aleyse Shannon as Kris make valiant efforts.

There are some interesting shots and camera angles, but the messy editing makes them few and far between. There isn't much in the way of soundtrack except the absolute highlight of the film – a clever rewriting of the lyrics of “Santa Baby.” Since most of the killing takes place off-camera or at very odd angles, even the special effects are bland by comparison to almost any other film in the genre.

As a concept, Black Christmas starts with so much potential but gets completely mired in its self-importance. As a Christmas gift, this is one you'll wish you still had the tag for so you could return it.