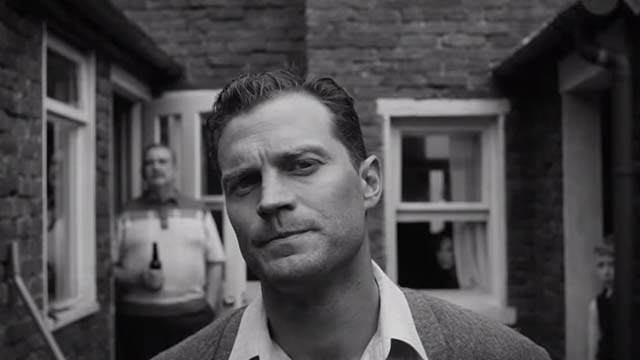 Kenneth Branaugh’s latest feature Belfast is a departure from his more recent novel based films (Murder on the Orient Express, Artemis Fowl). Belfast is a picture that looks longingly and delicately at the past during a time of turmoil and takes the viewer through these endearing and tumultuous moments through the eyes of a child.

Early in the movie we are introduced to Buddy (Jude Hill), a child growing up in Belfast on close-knit street. Within the first few minutes of the movie, there is a bit of a needle-drop moment. After a lighthearted look down the street, complete with kids playing soccer and banter among the inhabitants of the street, a riot storms down the street destroying the homes of Catholic residents. This set of events during The Troubles in Northern Ireland, setting the tone for the rest of the movie. Throughout, Buddy’s parents (Caitriona Balfe and Jamie Dornan) try to navigate this new landscape that seemed to change their life overnight and find a way to best raise Buddy and his brother Will (Lewis McAskie). Another major conflict is the fact that since Buddy’s family is protestant, they keep feeling pressure from the Protestant group to join the riots, or they too will face violence.

The choice to make this movie in black and white is a rather bold one. To quote Director Peter Bogdanovich, “Orson Welles says every performance looks better in black and white. It's the fact that you don't see blue eyes and blond hair. You focus on the performance, not the look of the people. And it enables you to capture the period better.” To me, this applies to this film because there are times when there are explosions, and there are times that are very hectic, but with the absence of color, the emotion and expressions of the actors shine through them. Plus, the use of black and white gives the viewer a sense that they’re looking at someone’s memory (Branaugh has stated that the film is semi-autobiographical). With that in mind, there are many scenes in which the characters are watching movies from around that time, and one can only assume they are movies that Branaugh found influential in his career of filmmaking.

Adding Dame Judi Dench and Ciaran Hinds to this film as Buddy’s grandparents is a fantastic touch as their presence rang as an escape from the turmoil of the The Troubles and the conflicts that he faces at home. Belfe and Dornan also turned in great performances as parents who are trying to hold on tightly to their community, family and way of life while dealing with the pressure to conform and hurt people that they love dearly and get out of financial disarray due to poor money management. Jude Hill in his debut role is stellar. He proves himself to be able to really deliver in those tender moments, has great comedic timing, and has an all-around great performance.

While some could interpret this movie as being “Oscar bait”, Branaugh writes and directs this look at his own past through that doesn’t have the nostalgic frills, but depicts it in a way that is tender, yet also real.

Murder on the Orient Express

Murder on the Orient Express