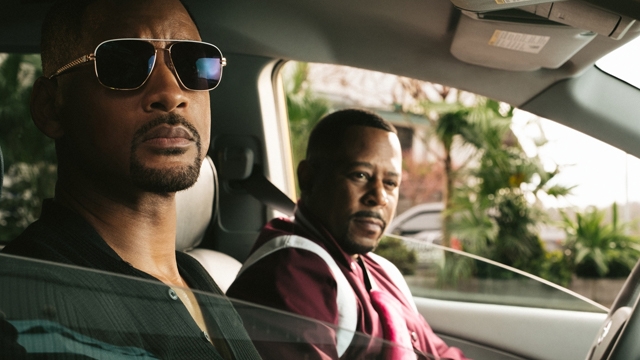 Will Smith and Martin Lawrence are back again as the childhood friends-turned-police detective partners in the third installment of the Bad Boys franchise. While Jerry Bruckheimer continues as producer, Adil El Arbi and Bilall Fallah (Gangsta) take over the directing duties. The difference is quickly noticeable in the highly entertaining screenplay by Chris Bremner, Peter Craig (The Hunger Games: Mockingjay), and Joe Carnahan (Smokin’ Aces).

New grandfather Marcus Burnett (Lawrence) has decided to retire from the force. Unlike previous threats, he finally does it and starts to kick back and enjoy life. But when a sudden assassination attempt is made on former partner Mike Lowery (Smith) and it’s followed by the successful killing of several other officials, Marcus believes it may be related to a case Mike previously worked,  and he decides to ride as a Bad Boy For Life, one last time.

There is a lot more to like in this film than in the past two movies. The story is far more cohesive, with an unfolding plot and adversaries that have a deeper dimension than the overused trope of a developing drug kingpin. It is much less about car chases, explosions, and bullets—although there are plenty of these—and more about the evolving characters of Mike and Marcus. Bremner, Carnahan, and Craig do a fantastic job of using what works above and beyond overextended pursuits and gun battles. The earlier portion of the film may seem like more of the same, but there are a lot of small moments that come together into a compelling and creative final act.

Arbi and Fallah know the shoes they are expected to fill and go to great lengths to hit all the notes of the previous films. But with the advancement in plotline also comes an improvement in direction, and it shows with more dramatic and believable portrayals. Will Smith gives one of his best performances, showing a deeper range and ability than mere alternation between anger and swagger. Lawrence follows suit, providing more sober moments than he typically exhibits—a genuine character instead of comic relief.

The action is much easier to follow in most scenes than in the first two films, which is a credit to the cinematography. It’s familiar and what you’d expect, yet much improved. The same goes for the special effects—lots of bullets, some blood, explosions, and car crashes. These might be overwhelming for some viewers, but not as dizzying as the prior movies. DJ Khaled does a wonderful job with the soundtrack on these, interspersing songs with background music; this keeps the film moving smoothly as the story progresses.

Bad Boys For Life shows that the series can tell an engaging story and still have all the action, snark, and humor of the previous two films. Instead of rounding out a story that has run its course, the improvements show that Smith and Lawrence may still have some room to be Bad Boys FOUR Life.