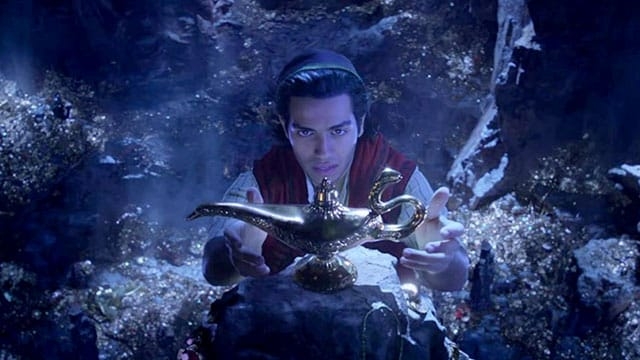 Director Guy Ritchie, doing double-duty as scriptwriter with John August, brings us the next step in Disney’s live-action versions of its classic animated films with Aladdin. Despite its obvious source material, there is just enough new and different to make this film a fresh entry.

Aladdin (Mena Massoud) is a common street urchin whose life consists of barely surviving - eking out an existence somewhere between thief and beggar. But his life takes a dramatic turn from a chance encounter with Princess Jasmine (Naomi Scott), and then the Royal Vizier, Jafar (Marwan Kenzari). Jafar recruits him to retrieve a magical item from the Cave of Wonders, which brings Aladdin face-to-face with the Genie (Will Smith) and a potential new destiny that lies far from simply wondering how he will eat that day.

Much of the screenplay is sourced from the original, although there are some changes to the story, mostly filling in a little more background. These changes are primarily solid, adding depth of character to the portrayals, as well as additional motivations. Iago (voiced by Alan Tudyk) is the exception. While seemingly more evil than his original, he is also less developed and lacks the gruff personality that made Gilbert Gottfried’s rendition so memorable. Also, while Jafar’s motivations are more rounded, his character seems more greedy than he is evil, which is a loss.

Ritchie’s direction is rich and colorful, adding nuance to the characters that make them interesting and engaging. In some cases, a gentler touch could have paid off: an editing decision to speed up or slow down the action disrupts the film’s pacing rather than enhancing it.

Each actor seems to be a near-perfect casting choice, with the exception of Jafar. Kenzari’s performance suffers less from a lack of talent than a lack of character, though he does do quite well with what he has to work with. Had the character been written to be as diabolical as the original, there is no doubt he would have been up to the task. Massoud brings fun and lightheartedness to Aladdin, making him a character the viewer can both enjoy and care about. The real stars of the cast are Naomi Scott and Will Smith. Rather than fill some very big shoes, Smith chose to make the Genie as much his own as possible. Scott also takes the character of Jasmine and owns it, making her someone much more than just what the script called for. Unfortunately, Alan Menken added a song where Jasmine talks about what she is going to do (or just before, in the reprise) rather than doing it, which detracts from her actually taking her much-belabored action. The character still draws strength from her decision, but the song crowds the moment.

The cinematography is lavish and beautiful, featuring long shots that are rich in color, depicting an Agrabah that is much more alive than the glistening but static original. The special effects are often spectacular, although it was seemingly determined that the original flying carpet scene with Aladdin and Jasmine is so iconic that to stray from the path would be blasphemous, resulting in a dull rehash.

There will doubtless be those who say it is too much like the original film, just as there will be those who say Ritchie took too many liberties. Both camps would do well to look at Aladdin as its own film, as they will be much more likely to see the diamond in the rough.